The allure and benefits of Fugu

Fugu, also known as the "king of white fish", is rich in taurine which revitalizes body stamina and strengthens the vascular and cardiovascular systems. Similarly, it contains a high level of collagen and protein, while being low in fat and calories, and so is known to have tremendous beauty effects.
Its perfectly supple texture is kept when prepared as Techiri or Tessa, and leaves those who eat it once fully satisfied yet craving for more.
Osaka-Torafugu-No-Kai uses Fugu which are 2 to 3 kilograms each, and there are hardly any other establishments which can procure such premium-sized fish on a daily basis.
All Fugu served here are farmed-raised and not naturally caught from the ocean. This is because while natural Fugu was highly valued in the past, there is much more pollution in the ocean which leads to higher and lethal levels of toxicity in natural Fugu. The Fugu served at in the cuisine at Osaka-Torafugu-No-Kai are carefully cultivated in unpolluted waters and given the best feed and that which we can present to you with full confidence and pride. 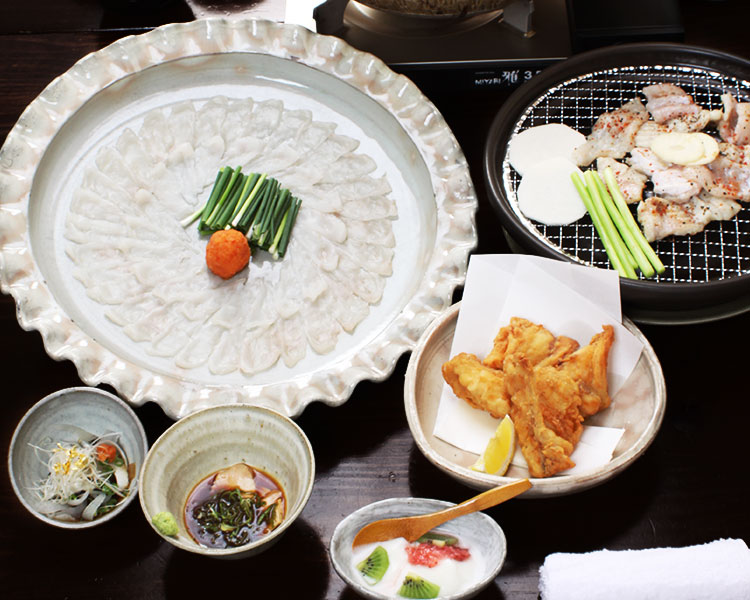 A license is strictly mandatory for the cooking of Fugu in Japan, in order to ensure that it is prepared safely with the correct knowledge and skill. Not many chefs abroad own this license and many countries even prohibit the importing of Fugu and so many people find it difficult to safely enjoy Fugu outside Japan.
Fugu that is farm-raised in Japan also do not have any poison and so can be consumed without worry.
It is commonly said that winter is the best season to eat Fugu, however this is not necessarily true. The spawning season of the Torafugu, the most premium species of the Fugu family, ranges from spring to early summer, and so Fugu cuisine between summer and autumn is also a special delicacy. (Fugu roe is only available from late November to April.) 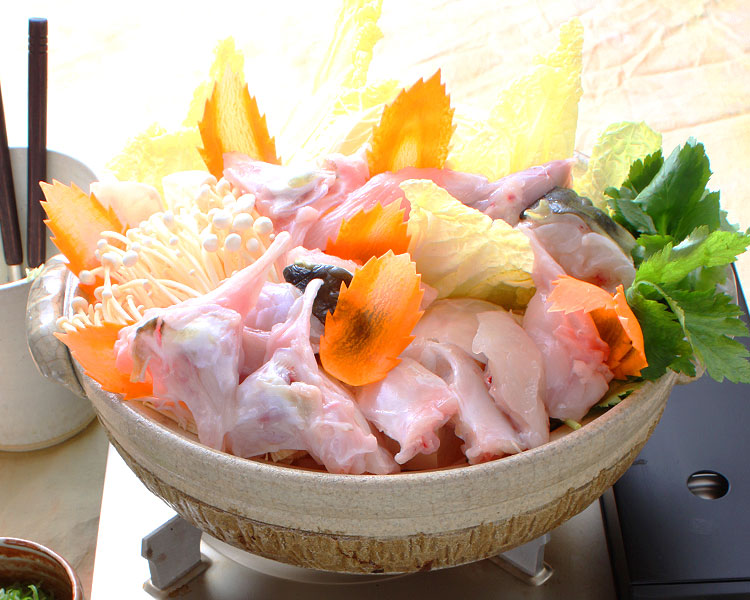 Pointers regarding the seasons.

We offer Fugu cuisine all throughout the year.
Only Fugu shirako (roe) is limited to between winter and spring (late November to April). A special delicacy of premium quality ingredients, Torafugu, Hamo (conger eel) and Matsutake mushrooms is available during summer.
The "Hire-sake" is another popular specialty item on the menu. Japanese sake, with a fin from a Fugu fish, is poured into a cup and lit with a blue flame.
Delicious Torafugu is available to be enjoyed at the Osaka-Torafugu-No-Kai all year around. It is our mission to introduce the world to this proud pillar of Japanese cuisine. Please come and enjoy Fugu cuisine with us.